Your College Hires Are Already Looking 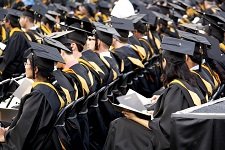 If you're hiring recent college grads or have some already on staff, you'll want to take a look at these stats. They offer an interesting look at the Class of 2016, a year out from graduation.

And there's no reason to think they don't apply to the 2017 college grads you just hired.

Here's one that caught our attention: 20% of the 2016 grads who have jobs are already looking for another. Even though the survey behind these stats is a small one -- 500 -- and not especially scientific, that stat jibes with others.

But here's one that drills a little deeper than most of the other surveys: 49% of last year's grads have already had more than one job. What accounts for that? The survey by the education loan site Lend Edu doesn't speculate. Our guess is that a substantial number of the 51% who didn't have jobs at graduation took temp jobs, especially the 18% who say they have had two or more jobs.

What about the other 31%? Well, there's a pretty strong assumption you can make from the other stats that they simply didn't like their first job. The survey found 23% either don't like what they are doing now, or are indifferent. Sure, 23% is not 31%,  hat gives is this: The survey participants had already made their job changes and a number of those into their second, or third, or even fourth job now like what they are doing.

We've highlighted some of the more negative findings because those are the ones managers and HR people need to be concerned about. Flip the numbers around and the good news is that almost 80% of the 500 grads from last year like their job.

Check out the stats. Especially look at those way down the list; those are the ones from #12 on. Here is where your company can make a difference for your 2016 and 2017 college grad hires. Bring in financial planners -- many offer workshops for free -- to help your workers understand budgeting and learn how to plan for the future.

You may not be able to do anything to make the 51% feel they are being paid adequately. You can, at least, help them manage their paycheck in a way that doesn't have them living from week to week.