Will We Be Living At Work In the Future? 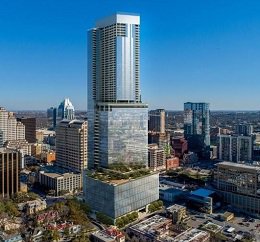 Working where you live has become, if not yet the norm, certainly a much more common practice since the COVID pandemic.

Yet even as that trend becomes rooted – PwC found employees far from eager to return to an office – a new one may be emerging. The company town, reincarnated in the form of mixed-use buildings, is beginning to gain traction.

These developments are barely a blip on the real estate radar. Yet a few ambitious developers are taking the risk that workers in the post-COVID world will not want to endure the daily commutes to a central workplace as they did before.

“If I’m a company and I’m going to build a 400,000-square-foot office space with the typical office configuration — offices, conference rooms — now I’m realizing that if I build 200,000 or 300,000-square-feet of apartments to go with that, those units become work-from-home offices of sorts,” he told Digiday.

Subsidized housing and employer-owned rentals are hardly a new phenomenon. The practice harkens back to the days when mining companies built whole communities to attract and house the workers they needed. Though the abuses of avaricious owners made the company town nearly synonymous with feudalism, some version of employer-provided housing exists in places as different as oil fields in the Dakotas and high tech centers of the San Francisco Bay Area.

Now a more updated version is emerging. Gensler has been involved in a number of hybrid work and home constructions including one in Los Angeles and the 6 X Guadalupe project (pictured) now being built in Austin, TX.

“We’re not all going to be working from home for the rest of our lives, and the office is not going to die,” said Howell.

In these mixed use projects, Gensler has designed in some traditional office space, conference rooms and co-working spaces, as well as apartments with in-home offices. When workers need to collaborate in-person, it’s a short walk to the company office.

In another project in downtown Philadelphia, Franklin Tower has been converted into a mixed-use building. Apartments are on floors with windows. The windowless floors are used for co-working space, study pods and storage areas, gyms, yoga studios and community kitchens for corporate tenants.

Says Kevin Miller, CEO of the firm GR0, “If employees design their homes to be adjacent or combined with their offices, they can start to view their coworkers as friends and even family.

“The most successful, productive businesses always seem to have teams with close ties and deep connections with each other.”