What's a Gig? No One Is Sure 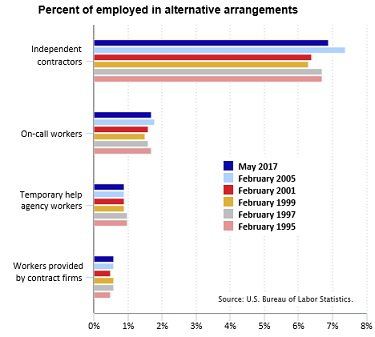 What's a "gig" job? Like Justice Potter Stewart once wrote, you may know it when you see it. But for the Bureau of Labor Statistics, that's just not good enough.

As the acting BLS commissioner admitted in a blog post last week, "BLS does not have a definition of the gig economy or gig workers. In fact, researchers use many different definitions when they talk about the gig economy."

Depending on how you define it, the gig economy could have as many as 56.7 million Americans participating, or as few as 1.6 million. The commissioner, Bill Wiatrowski, illustrated the problem this way:

In the first example, the plumber or electrician is an employee and also a... what? Independent contractor? Freelancer? Gig worker? And in the second, who ever thought of a sub as anything other than a temp? But because one sub handles everything via an app, does that make him a gig worker? In BLS-speak, it does mean he has an “electronically mediated" job.

"Confused? So am I," admitted the commissioner. He went on to say that to clarify matters, in its monthly citizen survey in 2017, the BLS asked 4 questions "about short jobs or tasks that workers find through an app or website that both links them with customers and arranges payment." These are electronically mediated employment.

Turned out so many people were confused by the questions the BLS had to review and recode all the responses. When it did, the Bureau came up with 1.6 million electronically mediated workers -- a type of gig worker count.

How close is that to an accurate of the gig economy? Not anywhere near close.

In our temporary staffing group here at Green Key Resources, we know there are a substantial number of workers who enjoy the flexibility of temporary employment. They prefer to choose when to work and where. Are they gig workers? Surely, some would certainly think of themselves that way.

And remember that plumber and electrician from the example, the commissioner didn't call them gig workers and rightly so. Freelancer might be better; multiple-job holder is even more descriptive. When the BLS included all those kinds of workers -- "employed people who did informal work in addition to a regular job" -- in its multiple-job holder category, it increased the percentage "somewhere between 3.0 percent and 20.7 percent."

It's enough to make a labor economist's head spin, which is why the BLS has hired the Committee on National Statistics to take on the problem of defining and counting the various types of workers. Getting a grip on the gig economy will take time; the report and recommendations are due next year.