What Do You Need to Earn to Rent? 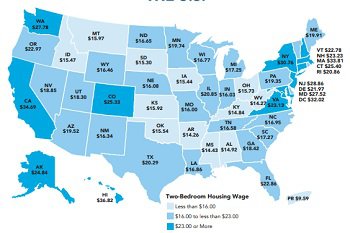 To afford a two-bedroom rental in New York City's fashionable Chelsea neighborhood you'd need to earn at least $49 an hour. Drive north 80 miles to Poughkeepsie, and you can get two-bedrooms for little more than half that.

The National Low Income Housing Coalition has compiled HUD data from across the U.S. on the fair market rent for one and two-bedroom rentals by state and right down to individual zip codes. Then, using the rule-of-thumb that rent should be no more than 30% of income, calculated what a household would need to earn to afford the rent.

This is a useful tool if you're thinking of relocating. Because it's all based on government estimates of what it costs to rent a modest house, the actual rent expense may be understated. But it does offer a general guide to the relative rental costs.

What the Housing Coalition report -- and it's quick reference map --shows is renting in the South is about as cheap as it gets. It's possible to get a two-bedroom earning as little as $14.26 an hour in Arkansas. In four other states -- Alabama, Kentucky, Mississippi and West Virginia -- you can rent for less than the $15 an hour minimum wage that some states and municipalities are requiring.

On the other hand, in Hawaii, California, Massachusetts, New York and Washington, D.C., it would take more than $30.00 an hour on average.

What makes the Housing Coalition's project especially compelling is that the data is presented interactively. As our example shows, where in a state you are makes a big difference. Manhattan is pricey. Poughkeepsie is not. Even in Hawaii, the priciest (on average) state there's great variability. Statewide, the average hourly pay for a two-bedroom is $36.82. In the Koko Head area of Honolulu, you need to earn $59.62. On Lanai, you only need to earn $24.42.

You can plug in the Zip code of an area you want to see what you'd need to earn to afford to rent. You'll find checking out the country addicting, whether you have any intention of moving or not.