About those year-end bonuses Wall Street bankers and traders were expecting just a few months ago: If they happen at all they’re going to be smaller than last year. 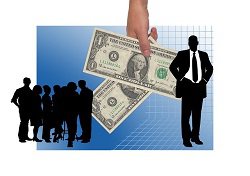 The compensation consulting firm Johnson Associates Inc. says the prolonged business shutdown, which has kept millions unemployed, is weighing on banks, which have upped their cash reserves anticipating the possibility of widespread credit defaults.

They’ve also taken a hit to lending and related activity, as consumers have dramatically reduced their spending.

With so many stores closed US consumers had few alternatives but to save. The personal savings rate soared to 33.5% in April, more than four times the 7.5% in April 2019. Savings, as a percent of disposable income, has since fallen to 19% in June, according to data from the government’s Bureau of Economic Analysis. But that's still well above the pre-COVID rate.

According to a Bloomberg article, Johnson Associates predicts that bonuses and incentives for those in hedge funds, asset management and private equity will be lower by as much as 15%. Those in retail and commercial banking are looking at up to a 30% bonus cut.

“That is going to be a really troublesome finish of the year,” report author Alan Johnson, is quoted as saying.

For stock and bond underwriters and equity traders on the other hand are likely to get bigger bonuses. The Johnson Associates prediction is their year-end bonus will be 15% or even 20% above last year.

Underwriters have been kept especially busy as companies struggled to raise money to maintain payrolls and cover other expenses.

Traders, meanwhile, have worked to keep up with record volumes of transactions from investors trying to stay ahead of the highly volatile, but rising, markets.