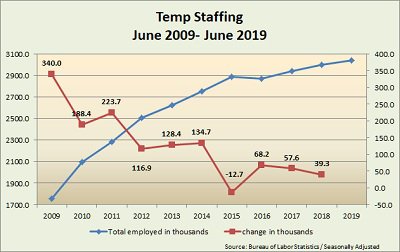 Except for a blip in 2016, temporary staffing has grown steadily over the last decade. From June 2009 through the end of last month, the staffing industry added almost 1.3 million workers.

In the years following the Great Recession, the staffing industry expanded rapidly, adding an average 189,000 new workers between 2009 and 2015. As the nation's economic expansion matured, the pace slackened. The industry added an average of only 38,100 workers a year.

Now, in the first six months of this year, growth in the sector has been flat on a seasonally adjusted basis.

“Headline numbers from the last two jobs reports [monthly reports from the Bureau of Labor Statistics] have suggested steady growth in temporary staffing employment, but these gains have been more than offset by downward revisions to prior months,” said Tony Gregoire, research director at Staffing Industry Analysts. “In fact, temporary staffing employment has lost 22,000 jobs since December as the economy has cooled.

The first of the year historically sees a dip in temporary staffing, as holiday work assignments conclude. In the second quarter, temp hiring tends to pick-up. This year is no exception, though the pick-up has been modest. Since the end of March, temporary staffing has added 8,000 new jobs.

Predictions for the current quarter are even more modest. The Palmer Forecast, from the staffing and HR consultancy, G. Palmer & Associates, projects demand for temporary workers will increase 0.6% on a seasonally adjusted basis in the third quarter over the third quarter of 2018.

A second indicator, the Staffing Index from the American Staffing Association, is at 93, well off its high of 103 reached last November. The Index is derived from changes in staffing jobs as reported by participants in the Association's weekly survey.

“Although the 2019 second quarter marked the 38th consecutive quarter of year-over-year increases in demand for temporary workers; our forecast for the 2019third quarter predicts a much slower rate of growth,” said Greg Palmer, founder and managing director of G. Palmer & Associates.“With the economic signals being mixed, the directional trend is slightly down as we move into the third quarter.”

Posted in Temporary Staffing | No Comments