There’s a tech job that pays well, is growing fast and is in such demand that it’s taking employers weeks to fill an opening.

And it typically doesn’t require knowing any language besides English. 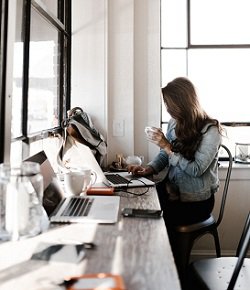 With the number of devices and applications mushrooming and their capabilities increasing just as rapidly, explaining to users how to make everything work is the job of technical writers. “They’re vital players when the time comes for a company or team to communicate its work to the rest of the world,” writes Nick Kolakowski on the Dice.com blog.

Instruction manuals are how most of us come in contact with the work of technical writers. Some technical writers specialize in writing these consumer focused materials; most write them along with handling other documentation tasks.

It may seem simple enough to describe the features of a new smartphone, but as the Dice article points out, “If the technical writer screws up, it could result in an extremely frustrated customer base — which reflects badly on the company.”

Many technical writers have a broad range of responsibilities that in the tech industry itself may include maintaining internal documentation of software fixes and new features. Often, the technical writer will work directly with an engineering team, becoming involved early in the product cycle to develop the deep understanding they’ll need to clearly explain complex features. This is especially true for those tech writers whose documentation will be used by IT professionals and engineers.

Simon Dew, a technical writer with an international firm that sells a database platform, says he writes for a technical audience because the users are database managers and developers.

It may not be a job requirement to know how to code – though there are writing jobs requiring a computer science background – but all writers must be good at asking questions, be detail oriented, understand technical concepts and write clearly. 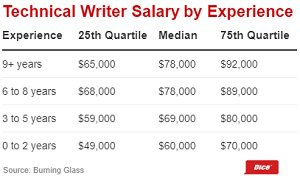 Jacklyn Carroll, a technical writer who was an undergraduate English major who went on to earn a Master’s in professional and technical writing, says, “Any tech writer would be able to tell you that our job includes a lot more than just documentation. We have to communicate with people across multiple departments, write for a variety of audiences, and many of us have to understand programming or code at the same level as software developers.”

As a result, starting salaries can be as high as $70,000, according to Dice.com. The average for those writers with up to 2 years’ experience is $60,000. With more experience and skills, technical writers at the top can earn into six figures.