Tech Unemployment Down. Hiring Demand Up

Tech hiring is up. Tech job postings are on the upswing. And at 2.4% tech unemployment is well below the national average.

This trifecta of demand and availability is making tech hiring ever more challenging as employers begin to fill positions they’ve left vacant during the last year.

"Even though tech employment held up reasonably well during the turbulence of the past 12 months, many employers were in a wait-and-see hiring mode," said Tim Herbert, EVP for research and market intelligence at CompTIA. "With the three recent months of tech employment gains we're likely seeing that pent-up demand translate to new hires."

According to an analysis by the trade group CompTIA, IT occupations nationwide expanded by 178,000 jobs in February, while job postings for open IT positions surpassed 277,000, a 12-month high. 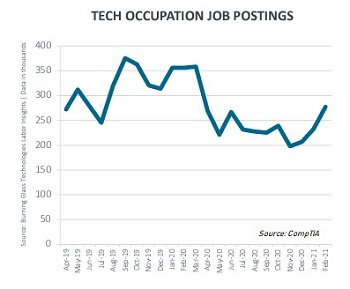 On a month-over-month basis, the biggest increases in IT job postings were in California, Illinois, Washington, North Carolina and Texas. The metro areas with the biggest gains were Chicago, San Francisco, New York, Washington, D.C. and San Jose.

Like nearly every other part of the economy, tech jobs took a hit during the height of the pandemic as employers canceled or postponed projects and expansion. Unemployment among tech professionals at one point in the last year approached 5%, a high not seen since the Great Recession in 2010. Since hitting that high in June, unemployment declined sharply to February’s 2.4%. It is expected to be even lower when the March report comes out next month.

If you’re having trouble filling tech jobs, give us a call here at Green Key Resources. Our recruiters know where to find the best tech talent and can help you fill those hard-to-fill jobs quickly. Call us at (212) 683-1988