While many businesses across the country are struggling in the face of COVID-19 required shutdowns, tech executives are more positive with nearly two-thirds expecting to see the start of a return to business as usual by mid-summer.

CompTia, the trade association for the tech industry, says 46% of tech leaders are “upbeat and optimistic.” Another 46% say their companies are “hanging in there.” A mere 8% report being in difficulty. 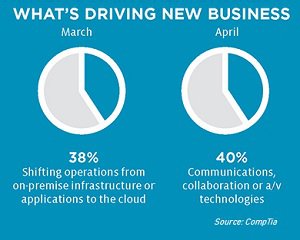 Much of the optimism may stem from the demand for tech services from companies whose employees are increasingly working from home.

When CompTia first surveyed its community and advisory council members in March, three-quarters said they were getting new business and inquiries. The larger share of the new opportunities (38%) came from businesses shifting from on-premises infrastructure to the cloud. In the latest survey, conducted at the end of April, the largest share of business opportunities came from communications, collaboration and video technologies.

For the managed services providers, CompTia’s April survey discovered their new business was shifting to cybersecurity, which grew from 39% in March to 44%. Meanwhile, new opportunities in consulting inquiries and outsourced and managed IT had dropped, the latter by 10 percentage points.

Overall, 83% of the responding tech firms were getting new business.

Tech firms, however, haven’t been immune from the disruption caused by COVID-19. The most recent survey found 58% of tech firms had customers cancel or postpone spending.

Still, barely 20% have laid-off staff or contractors or cut hours. In fact, the survey found 40% had taken no staffing action and more were hiring. The percentage of firms adding staff increased from 9% in March to 13% at the end of April.