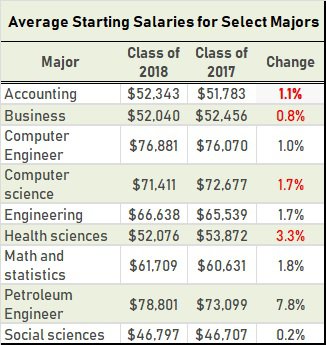 That's a healthy bump above the average personal income for all workers, which was $46,550 when last measured in 2016. However, the National Association of Colleges and Employers says starting pay for college grads has barely budged over the last three years,. The 1.4% increase from 2015 to 2018 is a "further illustration of the sluggish growth in overall salaries for college graduates in recent years," says NACE in its annual salary survey.

As usual, computer science grads were the top earners averaging $71,411. Surprisingly, that's down 1.7% from the average for 2017's computer graduates. On the other hand, engineering graduates saw a 1.7% increase in average starting salaries over 2017. NACE reported they averaged $66,638. Within the engineering major, grads with a petroleum focus scored the highest average starting pay: $78,801.

The complete report is only available to members of the association. Others can buy the report. The executive summary is free.