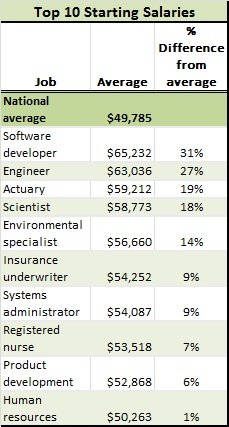 The class of 2017 is graduating into the best job market in a decade.

With unemployment at pre-Recession levels, and employers scrambling to fill jobs that are now staying vacant for a near-record average of almost 6 weeks, this first class of Gen Z college grads can expect an average starting salary of $49,785. That's 3% higher than last year, and, even adjusting for inflation, is almost a 1% boost.

“This has been the best year for students that I’ve seen since coming here,”  Thomas Ward told The Wall Street Journal. He's executive director of the career-services center at Adelphi University, in Garden City, N.Y., who joined the school in 2008.

The salary analysis from the Hay Group was based on the starting pay of more than 145,000 entry-level positions. Adjusted for inflation, the 2017 average pay is 14% higher than it was for the 2007 graduating class, the last before the recession.

STEM majors can expect even higher starting salaries. The survey found average pay for newly hired software developers to be the highest of all occupations at $65,232, 31% above the national average. Depending on where the job is, starting salaries can go even higher. That same developer job in San Francisco will pay $82,323 and in New York, $78,865.

Coincidentally, what employers are offering is largely in line with what graduating seniors expect to make. A survey by HR software vendor iCIMS found 9 out of 10 seniors expected to earn up to $75,000; 42% expected their pay to be in the $50,000 to $75,000 range.