Skateboarding Is Good For Your Mental Health

Stickers declaring "Skateboarding is not a crime" show up almost everywhere there are signs saying skateboarding prohibited or forbidden or something similar. It's skateboarders way of protest. 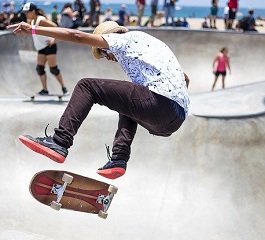 Now, a study out of the University of Southern California could add "Skateboarding is good for your mental health" and "Skateboarding encourages diversity" and a few others promoting the new found positive effects of the sport.

“Our research shows that through skateboarding, skaters develop the ability to communicate and build relationships with people from diverse backgrounds,” said Neftalie William, a co-author of the study published by the university's Pullias Center for Higher Education.

The Beyond the Board study surveyed over 5,000 skateboarders, most between 13 and 25. The responses included both women and skaters of color. In addition, researchers interviewed 120 skaters and stakeholders in seven cities across the US discovering skateboarding has benefits at odds with the stereotype of skaters.

According to the study, researchers found:

Skateboarding improves mental health – The vast majority of skaters surveyed indicated they skateboard for fun and/or to relieve stress.

Skateboarding and skateparks facilitate a sense of community among skaters – Skateboarders reported the value of connecting with people who share similar passions in skateparks, skate shops, and at skating events.

Skateboarding encourages resilience – The nature of skateboarding requires skaters to learn on their own and develop their own strategies to succeed Skaters frequently perform a trick hundreds of times over long periods before developing proficiency or experiencing reward for the efforts. Skaters in the study reported that they apply these lessons of resilience to their lives outside of skateboarding.

Gender and race matter – The study also showed that skaters of color felt a greater degree of safety from judgment within the skateboarding community than in nonskate contexts. Female skaters indicated they believe they are judged by their gender both in and out of skateboarding contexts.

The research was funded by the Tony Hawk Foundation.

Image by fancycrave1 from Pixabay