Seattle's Biotech Is Desperate For Workers 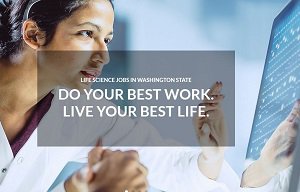 One of the nation’s premier biotech centers is finding it so hard to fill jobs the state's trade association has launched an ambitious marketing campaign to lure workers to Washington state.

“Our industry has jobs. We have jobs at all levels,” said Leslie Alexandre, CEO of the trade group Life Science Washington. “We eagerly welcome people to come and join our ecosystem or to be trained from our schools and colleges.”

The organization hopes to entice workers with a flashy campaign designed to sell the Seattle lifestyle and promote the industry. Life Science Jobs in Washington State, launched last week, with the tag line: “Do your best work. Live your best life.”

In photos, videos and text, the site showcases the Seattle area’s environment and its life sciences industry. The videos have biotech workers telling their stories, extolling the significance of the work they do and the livability of the state. The idea is to introduce the rest of the country to what the state and especially the Puget Sound area has to offer.

Outside the Northwest, said Alexandre, people "simply do not know what Washington is about it.”

The site’s FAQ reinforces the sell. Discussing the cost of living, the site says it’s lower than in “many other life science clusters.,” Industry pay is competitive. The site pitches strongly to families, declaring, “high-ranked schools, abundant parks and excellent healthcare make it one of the best states in the country to raise happy, healthy children.”

Among the initial 217 jobs, the majority are at a senior level, requiring an advanced degree and several years of experience in life sciences. There are, however, several jobs for IT professionals and others, including some mid-level opportunities.

She said entry-level jobs in biomanufacturing pay about $42,000, rising to as much as double after only a few years.