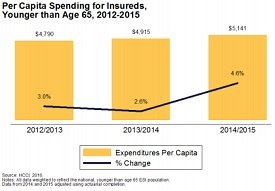 Increases in the cost of medical services and pharmaceuticals pushed spending on health care up by 4.6% for the privately insured in 2015. It was the largest increase in the last three years, according to a new report from the
Health Care Cost Institute (HCCI).

The cost of outpatient, inpatient, professional services, and prescription drugs increased between 3.5-9% in 2015, a bigger hike than in the prior two years, the HCCI report says. In fact, price increases rather than greater use of services were responsible for much of the increase in health care spending over the four years covered by the HCCI analysis.

“Spending grew faster than we might have expected in 2015, given the slower growth in previous years ( 3.0% in 2013,  2.6% in 2014),” said HCCI Senior Researcher Amanda Frost. “The combination of people using more health care services and the faster growth in prices pushed up spending, with prices playing the bigger role.”

HCCI reported that, "Spending on prescription drugs grew faster than spending on any other health care service. In 2015, $649 per capita was spent on brand prescriptions, an increase of 11.4% from the previous year, with more dollars going to brand hormones and synthetic substitutes (such as insulin and contraceptives) and to anti-infective drugs (such as those used to treat Hepatitis C and HIV). Spending on generic prescriptions reached $313 per person, a 3.3% increase from 2014."

The 2015 Health Care Cost and Utilization Report is based on 3.7 billion insurance claims from Aetna, Humana, Kaiser Permanente, and UnitedHealthcare. That accounts for nearly 40 million Americans covered by employer sponsored insurance per year, which accounted for about 26% of the nation’s privately insured population in 2015.
Tags: pharma
Posted in Healthcare, Human Resources | No Comments