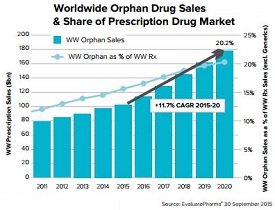 Orphan drug sales are forecast to total $178 billion through 2020, growing 11.7% annually over the five years, a rate almost double that of overall prescription drugs.

EvaluatePhama's new report on orphan drugs predicts that by 2020, they will account for a fifth of all prescription drug sales (excluding generics).

Defined as "a pharmaceutical product aimed at rare diseases or disorders," the number of these drugs available in the market has grown from 38 to 291 last year. The primary driver behind the increase is the Orphan Drug Act of 1983, which provides for significant financial and tax incentives for companies developing these drugs, which, in many cases, may treat conditions with only a few thousand patients.

"The enduring appeal of orphan drugs," says the report, "remains grounded in a variety of factors including the lack of alternatives for patients, lower R&D costs, easily defined patient populations, and the prices that the drugs are able to command."

According to EvaluatePharma's data, the average cost to U.S. patients (or their insurers) for an orphan drug was $111,820 last year. A non-orphan drug's average per patient cost was $23,331. The median cost -- the midpoint where half are above and half below -- was $66,057.

In the U.S.. the leading orphan drug by total sales is Rituxan, prescribed for the treatment of certain types of cancers. Made by Roche, it's 2014 U.S. sales were $3.6 billion.

The leading pharmaceutical firm in sales of orphan drugs was Celgene, with $6.6 billion. The firm's 2020 orphan sales are projected by EvaluatePharma to come to $12.7 billion.
Tags: report, pharma
Posted in Pharmaceutical | No Comments