Origami-Inspired Robot Shows It Can Do Delicate Surgery

A tiny robot, inspired by the paper-folding art of origami, may someday take on surgical tasks as delicate as pushing through a human eye to reach the hair-sized veins inside.

Two engineers recently demonstrated how a device weighing as much as a penny and no larger than a tennis ball can perform such delicate procedures with far more precision than a human. They described their work in the August issue of Nature Machine Intelligence. 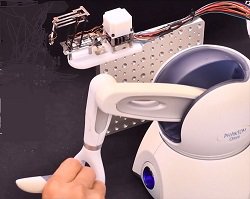 The device was able to outperform a human in a test that involved tracing a square smaller than the tip of a ballpoint pen. The so-named miniature remote center of motion manipulator or mini-RCM, was 68% more accurate than a tool controlled by hand.

In a second test, the device successfully punctured a mock vein twice the size of a human hair, simulating a procedure that involves puncturing an eye to reach the blood vessels at the rear in order to inject a medication. Such surgeries have been done on an experimental basis with other robots, but are considered too risky to be performed exclusively by hand.

An article on Harvard’s Wyss Institute for Biologically Inspired Engineering describes how Robert Wood, an engineering professor at Harvard, and Hiroyuki Suzuki, a robotics engineer at Sony Corporation, built the robot.

For years, miniaturized tools and cameras have enabled doctors to perform minimally invasive surgeries. Now, large robots are assisting surgeons by handling multiple tools with great precision. The downside is the size of these robots and their tools, and the cost. There’s also research suggesting that for many types of procedures these robots – costing $2 million and more – get no better results than traditional laparoscopic surgery.

Te mini-RCM, although still just a prototype, holds promise for reducing the size and cost of medical robots and has potential utility as a precise tool for teleoperated microsurgery.

“The Wood lab’s unique technical capabilities for making micro-robots have led to a number of impressive inventions over the last few years,” says Suzuki . ”I was convinced that it also had the potential to make a breakthrough in the field of medical manipulators as well.”

“This project has been a great success.”

Posted in Healthcare, Pharmaceutical | No Comments