Optimism is growing that the worst of the pandemic business retrenchment is over and that job growth may be just around the corner.

The Conference Board last week said its Employment Trends Index increased in January for the ninth consecutive month.

At the same time, Chief Executive released its latest poll of chief executive officers showing their confidence in future business conditions continues to grow. It is now where it was in February last year, just before the global business shutdown. Out of a possible 10 points, the 300+ CEOs scored their optimism about business conditions in the coming months at 7.1, a 2-year high.

In addition, Chief Executive reported that “A growing number of business leaders now forecast growth in revenues and capital expenditures as well. Meanwhile, they rated their confidence in current business conditions ‘good,’ at 6.2 out of 10.”

The Conference Board’s Employment Index and its Leading Economic Index, released late last month, are both on an upswing, if a slow and uneven one. The LEI increased by 0.3% in December after improving by a more robust 0.9% in October and 0.7% in November.

“The US LEI’s slowing pace of increase in December suggests that US economic growth continues to moderate in the first quarter of 2021," said Ataman Ozyildirim, senior director of economic research at The Conference Board."Improvements in the US LEI were very broad-based among the leading indicators, except for rising initial claims for unemployment insurance and a mixed consumer outlook on business and economic conditions."

The improvement in the Employment Trends Index has been far steadier and quicker. The index came in at 99.27 in January, a small .72 point improvement over December but a significant improvement from last spring when the index was just over 70. Still, the index is 10% lower than it was a year ago. 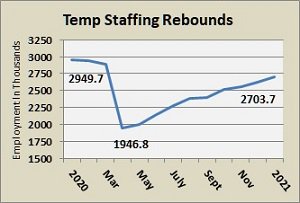 One of these, the number of workers employed by the staffing industry, has been a primary driver of improvement in the index, says Gad Levanon, head of The Conference Board Labor Markets Institute. “The Employment Trends Index has been increasing in recent months, with the largest contributing component being the number of jobs in the temporary help industry.”

Though Levanon cautions we should expect some uncertainty around job growth due to the risk of the emerging COVID variants, by spring he says, “We expect strong job growth to resume and continue throughout the remainder of the year.”