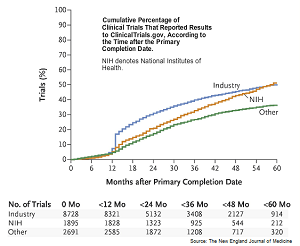 The agency charged with responsibility for managing the clinical trials disclosure site ClinicalTrials.gov is among those worst at complying with the law mandating the transparency.

An analysis of compliance with the 2007 law requiring the posting of summary results of publicly and privately supported clinical studies, found  that only 8.1% of trials funded by the government via the National Institutes for Health made it onto the site within the required 12 month period. Only
those trials funded by academic or government sources other than the NIH, had a worse compliance record.

No group, however, is anywhere near complying with any regularity. Pharmaceutical sponsored trials make it onto the website within the mandatory 12 month period a mere 17% of the time.

According to an analysis published in the The New England Journal of Medicine, the deadline for results within a year was missed overall by almost 87% of more than 13,000 clinical trials studied.

Conclude the study's authors, "Despite ethical and legal obligations to disclose findings promptly, most HLACTs (highly likely applicable clinical trials) did not report results to ClinicalTrials.gov in a timely fashion during the study period. Industry-funded trials adhered to legal obligations more often than did trials funded by the NIH or other government or academic institutions."
Tags: study, pharma
Posted in Pharmaceutical | No Comments