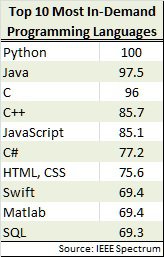 Python is the programming language most in demand by employers, according to an analysis of job listings by IEEE.

Close behind, says the professional association for tech workers, are Java and C. The three received IEEE scores of 96 or better. The next closest language was C++ scoring 85.7.

IEEE Spectrum, the online magazine of the organization, analyzed 11 metrics from 8 sources to come up with a variety of rankings in addition to those for job listings. The top five languages largely remain the same whether you consider Jobs (what employers want), Trending (languages growing rapidly in interest), IEEE Spectrum (it's own ratings) and Open (languages popular on open source hubs).

The list is interactive and can be filtered in a variety of ways by changing the weighting give to each data source.

While developers and IT professionals will argue over the rankings -- just check out the IEEE Spectrum comments -- the jobs rankings give recruiters and hiring managers a feel for just how competitive hiring can be. If you're looking for a Python developer, you're far from alone. In the No.1 spot on each list, Python is by far the most sought after skill and even among the languages on the trending list, it's well ahead of the others.

However, that doesn't mean hiring a C# developer (jobs rank 77.2) will be much easier. In fact, it may be even harder hiring a developer with skill in some of the less in-demand programming languages simply because so many developers want to stay current with what's trending in the market. There may not be so much demand for a Cobol developer, but try hiring one.

Whether you are looking for a Cobol specialist or need to hire a Python programmer yesterday, Green Key Resources can help you. We keep on top of the market and have a deep pipeline of talented tech professionals. Whatever your tech needs, give us a call at 212.683.1988.