Maybe We Should Just Say 'Hello'

Now that the coronavirus has rendered the handshake greeting dead, what will take its place?

Not the bumping of body parts. The NFL might get away with the chest bump because they’re already wearing more protective gear than a surgeon, but for the rest of us, bumping fists, elbows or chests is out. We’re still making contact. 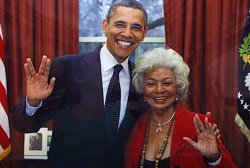 Don’t be quick to dismiss this as too Trekkie. Former President Obama flashed the salute when he greeted Star Trek actress Nichelle Nichols. Italian astronaut Samantha Cristoforetti did the same during her tours on the International Space Station.

Still not comfortable with that one?

In Iran and China, the foot touch is replacing traditional greetings that involved touching skin. Alas, there are two problems with this one. You need good balance and have legs long enough to maintain a 6 foot distance.

CNN’s travel section explored some alternative greetings used in various places around the world. One that caught on in Hawaii before being adopted by West Coast surfers is the shaka. You curl your three middle fingers, extending your thumb and pinky as a greeting. Shake it, knuckles facing out, for added emphasis, CNN suggests.

Just remember not to say “Dude.”

Anyone who does yoga knows the Namaste way of greeting. Bring your hands together next to your chest, fingers pointing up as you give a slight bow or head nod.

Another possibility is to adopt the American Sign Language way of saying hello. You bring your hand to the top of your forehead in a sort of salute, flicking your wrist away.

There’s also the acknowledgment greeting we all already use when our hands are full or we’re too far away to offer a verbal response. We do a quick chin up tilt. Samoans, CNN tells us, raise their eyebrows and smile.

On wilderness trails, hikers and backpackers will raise a hand and give a simple “Hi” or “Hello” as they pass. Simple, friendly and effective. And it works just fine at 6 feet.

Posted in General Interest | No Comments