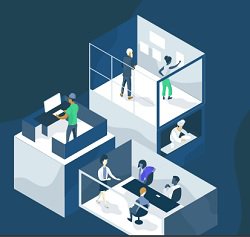 The last time we wrote about the employment prospects of humanities majors, the news was discouraging. A study by the New York Federal Reserve found half of recent English major grads were underemployed.

Our post was tempered by reports that employers were awakening to the advantages an educationally diverse workforce offered.

Now comes "Degrees at Work," a broader, more extensive study than the Fed's, which tells us the career opportunities for liberal arts majors are far brighter than the pundits suggest. Coming from the global labor market analytics firm Emsi, the research found that "Sales, marketing, management, and business and financial analysis were careers common to every major, typically appearing as a top-10 outcome."

In other words, Emsi found that after just a few years, English lit majors (and other humanities and social sciences grads) were as likely to be employed in sales, marketing, management and similar business occupations, as were those who majored in those subjects in college. "Education," the Emsi researchers declare, "Isn’t as deterministic of our work as we might believe."

First jobs after graduation are closely related to a grad's field of study, Emsi found. But by their third job after school, many have moved into unexpected occupations. A chart in the report shows many language and philosophy grads take a first job in education. While it remains the top job choice for these grads by their third job, a substantial number who started there have moved into marketing or public relations / journalism or sales, among others. Meanwhile, the majority of those who began in public relations and journalism jobs, moved into sales for a second job and were in marketing careers by their third job.

So, journalism and public relations, which was the second most popular job (after education) for a first job for language and philosophy grads, fell to 4th place by the third job after graduation, behind education, marketing and sales.

The report details the career outcomes for graduates in language and philosophy, social sciences, business, communications, engineering and IT. Though the STEM grads tend to remain in jobs closely aligned with their field of study, even then tend to migrate to other fields by their third job.