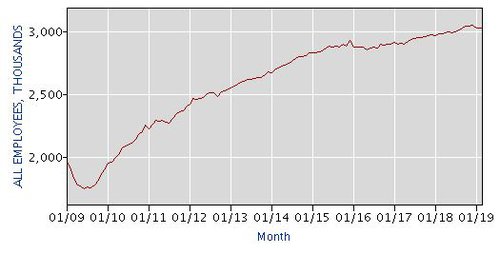 Temporary staffing has grown dramatically since the end of the Great Recession. The chart prepared by the Bureau of Labor Statistics shows the rise in the numbers employed by agencies in March. But that little dip since January has raised some concern that hiring may be slowing down.

Historically, temp staffing numbers decline in January, a reflection of the end of the holiday staffing season. As the country heads toward summer, temp hiring again picks up. The slight decline in staffing employment between February and March (down by 5,000 on a seasonally adjusted basis) is certainly nothing worrisome.

However, because temp staffing is considered a leading indicator, changes in employment are closely monitored by economists. It's also one of the contributors to the closely watched Employment Trends Index issued monthly by The Conference Board. The index for March, released earlier this month, declined on a month over month basis. That change prompted Conference Board Chief Economist Gad Levanon to express a cautionary note.

“After growing rapidly through most of 2017 and 2018, the Employment Trends Index has been fluctuating around a flat trend in recent months, suggesting that employment growth will continue, but at a slower rate through the summer,” said Levanon.

“Particularly concerning," he added, "Was the decline in the number of workers employed by the Temporary-Help Industry, an important leading indicator and component of the ETI, which declined by one percent in the past three months."

The temporary help number is only one of the 8 data elements used in developing the ETI. Three of them turned negative during March. Temp help was the smallest. The other two -- Percentage of Respondents Who Say They Find “Jobs Hard to Get, and Ratio of Involuntarily Part-time to All Part-time Workers -- were larger.

It's not possible to say with precision just what that means; it will take a longer stretch to show if there's a trend. In the meantime, Levanon suggested the labor market may be cooling slightly.

"The main trends in the US labor market – including growing employment and labor force participation, tightening labor markets and accelerating wages – are likely to continue in 2019, but more modestly.”