Job Outlook For New Grads Better Than In 2015 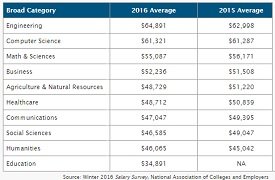 With college graduations just around the corner, there's good news for seniors. Employers plan to hire 5.2% more graduating seniors than they did last year.

That good news from the National Association of Colleges and Employers is tempered by the organization's finding that hiring intentions now are lower than they were in the fall. Between the fall 2015 hiring survey and the one conducted in March, the percentage of employers expecting to hire new grads dropped by almost 6 percentage points.

Explaining the change in intention, NACE said, “Much of the change can be attributed to a larger portion of employers reporting plans to trim hiring. Just 13.2 percent of respondents originally reported plans to hire fewer 2016 graduates than they did 2015 graduates; currently, more than one-third say that is the case.”

Business majors, including those in accounting programs, have a projected starting salary of $52,236.