Seven in ten IT professionals got raises last year, pushing the average base for non-managers to $83,500 and to $146,000 for those in senior positions.

The average percentage increase for non-managers, according to the 2020 IDG Insider Pro and Computerworld IT Salary Survey was 4.7%. Managers at all levels average between 4.2% and 4.3%. 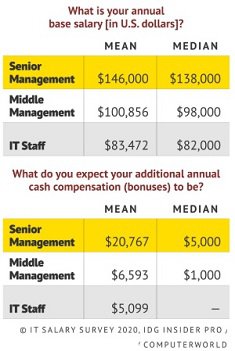 Tech professionals with certain specialized skills saw increases in the double-digits. The report said security professionals averaged 11.2% and those in enterprise application integration got 11.3%.

The majority of respondents to the Insider Pro / Computerworld survey (55%) said the raises were standard annual increases; 20% attributed them to cost of living increases while 30% said the raise was tied to their job performance. Web developers, among the lowest paid of tech workers got an average 11.1% boost in their base pay last year. With bonus -- $10,491 on average – their total compensation averages just shy of $70,000.

Contract workers too enjoyed pay hikes. Though the survey had only 102 responses from contractors, 92% said they got a bump. Salaried contractors reported earning a new annual base of $97,742. Those on an hourly contract are averaging $125 an hour.

According to the report, “CIOs took home the most flush paycheck — a total of $202,224 in total compensation, on average. CTOs pulled in an average of $192,561 annually while the mean pay for chief information security officers (CISOs) was $167,780.”

Considering the average pay increase for all private, non-farm workers last year was 3.1%, it’s no surprise the Insider Pro / Computerworld survey found 60% of IT professionals satisfied or very satisfied with their compensation.