After seeing investors move their money out of hedge funds for nine consecutive quarters, Bloomberg says better times for the industry are right around the corner.

The prediction comes from a Bloomberg Mandates survey of 50 institutional allocators with more than $500 billion in assets. Half of them said they have or plan to increase their investment in hedge funds.

Reporting on the results of the survey, Boomberg.com said, “The industry emerged as the top pick among six major alternative asset classes, followed by private debt. About 60% of those surveyed said they were re-jiggering their investments as a result of the market turmoil.”

That’s good news for managers. Hedge funds have been struggling for several years just to stay even with market indices. In the first half of this year, Hedge Fund Research reports that on an asset-weighted basis, the industry lost 7.9%.

However, Evestment said average hedge fund returns in June were positive by 2.07%. That improved the average half-year return to a minus 3.37% for the industry as a whole. By comparison, the S&P 500 was off 3.08% at mid-year, according to Evestment data. 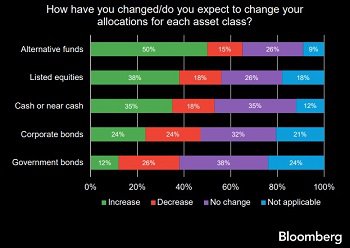 A Credit Suisse survey released at the end of June found that among the 160 institutional investors it surveyed, hedge funds were strongly favored among the 10 major asset classes. At 32%, net demand -- the percentage of investors increasing allocations less the percentage decreasing – was the highest in the last five years.

Joseph Gasparro, Credit Suisse’s, head of Americas capital services content, suggested that the renewed enthusiasm for hedge funds is being driven by the market uncertainties as evidenced by the vacillation in the S&P.

“The incredible run-up in equities from late March to early June, the ‘easy money’ if you will, is likely not going to repeat,” Gasparro told Bloomberg. “The environment going forward will include more uncertainties, with investors relying on hedge funds to help navigate.”

In the Bloomberg Mandates survey, 60% of those surveyed said they were reallocating their investment mix because of the market turmoil. Bloomberg said long-short equity was the most popular hedge fund strategy. Funds-of-funds was the least popular.