How to Win In the Next Recession 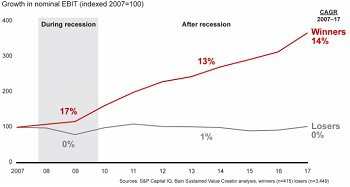 International consulting firm Bain & Company issued a report last week that should serve as a blueprint for leading a company through a recession, which is imminent, at least according to Beyond the Downturn: Recession Strategies to Take the Lead.

"Predicting the onset of a recession is difficult, but a downturn likely will arrive soon," the report maintains, citing the length of the current expansion, economic turmoil over tariffs and trade and other conditions that "suggest the next recession is not far off."

After that cautionary note, the bulk of the report details what lead some companies to emerge as winners -- big winners in many cases -- and others as losers. After analyzing the performance of some 3,900 worldwide companies before, during and after the last recession, Bain & Co. concluded, "The winners excelled in four areas: early cost restructuring, financial discipline, aggressive commercial plays and proactive M&A."

"The eventual winners deliberately planned to capture opportunities before the recession in ways that are just as relevant today. While they focused intensively on cost containment, they also looked beyond cost," says a company summary of the report. "Playing offense almost always trumps simply hunkering down, and the best companies usually gain market share during a challenging economy."

The difference between the winners and losers is striking:

"The winners grew at a 17% compound annual growth rate (CAGR) during the downturn, compared with 0% among the losers. What’s more, the winners locked in gains to grow at an average 13% CAGR in the years after the downturn, while the losers stalled at 1%."

The report discusses each of these areas in detail, giving company leaders specific examples of what two successful companies actually did to protect the business and grow it.

The losers, the research found, "Tended to follow a few recession dead ends. Some tried to slash and burn their way to the other side, under the misconception that extreme cost-cutting would be enough to survive the storm. They cut R&D across the board, scaled back on sales and marketing activities, laid off valuable talent and ruled out acquisitions. Other lagging companies strayed outside their core business, while others tolerated poor results during the downturn."