You can thank Julius Caesar for tomorrow. Borrowing from the Egyptians, he decreed that an extra day would be added to the calendar every four years. Thus Leap Day was born.

It wasn’t a perfect solution to figuring out what day it was, but it worked fine until the 1500s when religious holidays had drifted 10 days off the mark. Pope Gregory fixed that problem by eliminating Leap Day in most century years. We had one in 2000 but the next time a year ending in 00 has a Leap Day, it will be 2400. 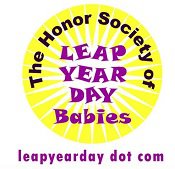 As befits a day that comes only once in four years, all sorts of customs and traditions and, naturally, superstitions have become associated with February 29.

Way back in 5th century Ireland, St. Patrick decreed that on Leap Day women could propose marriage to me. At some point, the tradition crossed into Scotland where, 700 years later, a law was passed not only permitting the proposing, but imposing a fine on bachelors for refusing.

The Greeks see it a little differently, considering it unlucky to get married on Leap Day. In Denmark, tradition requires a man refusing a Leap Day proposal to buy the woman 12 pairs of gloves. Supposedly this was to hide the fact she got no ring.

Being born on Leap Day is either considered lucky or disastrous. The Scots have a saying that “Leap year was never a good sheep year” and will lament a child born on Leap Day as condemned to a life of suffering.

Astrologers and statisticians say it’s a lucky thing to be born on Leap Day. Mathematically, you have only a 1-in-1,461 chance of being a leapling, which is what they call those born on Feb. 29. Only about 5 million people worldwide are estimated to be leapers, all of them eligible to join the exclusive Honor Society of Leap Year Day Babies.

Should you wish to celebrate Feb. 29th more officially, the southwest city of Anthony holds an appropriate festival every four years. The city of 5,700 straddles the Texas New Mexico border and calls itself the Leap Year Capital of the World.