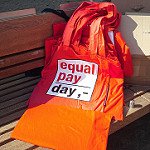 Whether you believe, as some advocates do, that April 10 is the literal equivalency day or that it is symbolic, there's no doubt women overall are paid less than men for doing the same or essentially the same work. The Pew Research Center just yesterday posted that its latest pay analysis found women earned about 82% of men last year.

"Based on this estimate, it would take an extra 47 days of work for women to earn what men did in 2017," said the researchers. The wage gap for millennial women is smaller -- they earn 89% of a man's wage -- but it's still there. And though the gap has narrowed since 1980, when there was a 36 cent difference, it persists.

According to Pew, much of the gap is due to differences in education, occupational segregation and work experience. Especially in education, women have made significant gains; more women now hold college degrees than do men. But, say the researchers, other harder to measure factors such as discrimination also play a role. And women are much more likely to interrupt their careers or take time off to care for family.

This is not an issue unique to the U.S. Last week in the United Kingdom a pay disclosure law went into effect requiring many employers to publicly report gender pay gaps for average pay, median pay and annual bonuses. The BBC said of the 10,000 companies reporting, 78% admitted paying men more than women -- some paid men 50% or more than women. When it comes to bonuses, the financial sector has the biggest gap -- with women paid 35% less than men on average.

Here in the U.S. we don't have any equivalent disclosure law, though several states and cities do require employers to pay men and women equally. That may seem redundant, given the federal Equal Pay Act, which requires gender pay equity. The local and state laws, however, typically broaden the application beyond pay comparisons within a single location and extends it to jobs that are not necessarily the same.

Equal Pay Day was first observed in 1996, and has since spread internationally especially to Europe, where the International Federation of Business and Professional Women has been active in promoting its aims.