Fecal Transplants May Be More Effective Than Antibiotics 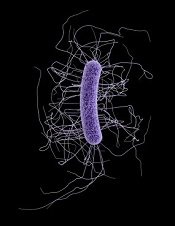 One of the unfortunate consequences of a course of antibiotics is that besides killing off the infection for which they were prescribed, they also kill off "good bacteria."

These good bacteria live mostly in the human gut, helping the body metabolize food, fight off bad microbes, produce vitamin K and, researchers are just beginning to discover, can do even more. Studies are finding that gut bacteria may predict susceptibility to a type of arthritis, protect against some cancers and even contribute to a healthy heart.

Preserving the health of these bacteria is another of the reasons doctors are increasingly hesitant to prescribe antibiotics for minor infections and will often refuse them for viral infections where they do no good anyway.

For most of us, the side effect of antibiotic treatment is diarrhea, a sure sign the microbiota in your intestines has been largely or completely wiped out. Within a few days of ending the antibiotics, the good bacteria begin recovering and the body's balance soon returns to normal.

Yet in half a million cases annually, takes hold, causing not only diarrhea, but colitis as well. It is deadly, killing 15,000 people each year. Those over 65 are most susceptible. The CDC says, one in 11 people over 65 diagnosed with a healthcare-associated clostridioides difficile infection will die within a month.

The good news is that most people who come down with C. diff recover on their own and within just a few days, as the good bacteria rebuild their colonies. But in more serious cases, the infection is treated with more antibiotics..

Now comes a new study that says fecal transplants may be a better solution for the more stubborn cases. Published this week in the Annals of Internal Medicine, the study involved 290 patients; 109 were treated with fecal microbiota transplantation (FMT) and 181 received antibiotics. Those receiving the fecal transplant, which is pretty much what you're thinking it is -- the transplant of fecal matter from a healthy person -- were far less likely to develop complications. Their survival rate was 30% better than those treated with antibiotics and their stay in the hospital was half of the other group.

It may seem a strange way of treating an illness, but fecal transplantation has been around for a while. The concept is that by taking fecal samples from a person with a healthy gut and, via colonscopy, depositing it in the intestines of a person whose good bacteria have been wiped out, it will begin the repopulation process. When that happens, the good bacteria create an environment that's good for us and inhospitable to C. diff, killing it off with out the need for drugs.

More study is needed if fecal transplantation is to become the preferred treatment method. And it does have some risks. Several months ago a patient died and another became sick from a fecal transplant contaminated with a drug-resistant bacteria.