Family Doctors Are In Demand Everywhere 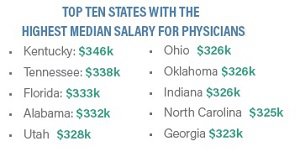 Family physicians are the most recruited of all doctors. The demand for these family practitioners is expected to grow by 10%, second only to psychiatrists. Yet those who practice family medicine have seen their average pay decrease, making these doctors among the lowest paid of all medical specialties.

These aren’t new revelations, but they stand out starkly in the just released Physician Compensation Report from Physicians Thrive, a financial advisory firm for doctors. The report is a compilation of data from multiple sources. It covers pay and bonuses by physician specialty and practice, and drills down into regional and state differences, hiring demand and gender gap issues.

Primary care physicians, including family medicine practitioners, earn an average of $243,000 per year, up from $237,000 in 2019. But half of all family medicine doctors earn less than $205,000. And they’ve seen their pay decrease by 8.3%, the largest of all medical specialties, according to the report.

It’s not a matter of a significant gender imbalance the way it is in pediatrics where almost two-thirds of the doctors are women. Or in obstetrics/gynecology, which is 59% female. The Association of American Medical Colleges says 59% of the family medicine doctors are male.

For whatever reason, the Physicians Thrive report says that, “Since 2014, the number of physicians choosing to work in family medicine has decreased, leaving family practices understaffed throughout the country.”

Picking up at least some of the slack are nurse practitioners and physician assistants. The report says 78% of NPs and 33% of PAs provide primary care, according to the report. Though they do much of the same work as a physician, nurse practitioners on average earned $124,000 in 2019.