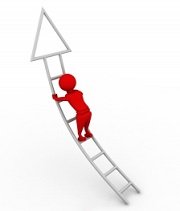 So you didn't get into the college you wanted. You didn't get the job. You missed out on the promotion. Don't despair. There's solid evidence that you'll be better off in the long run.

A trio of researchers at Northwestern University found that setbacks early in your career can be just the motivation you need to shine later. Writing in the journal Nature Communications, the team found, "Despite an early setback, individuals with near misses systematically outperform those with narrow wins in the longer run."

For those who persevere despite a loss -- and in their study 10% did not -- the researchers said their "findings show that prior setback can indeed be a mark of future success." "The findings do suggest... that for those who persevere, early failure should not be taken as a negative signal — but rather the opposite."

The researchers studied two groups of scientists: one group that squeaked through the grant process of the National Institutes of Health and a second that just barely missed winning a grant. Ten years later, the group that had more impact as measured by the number of papers they produced and the influence of those papers, turned out to be the near miss group.

“This is not just survival of the fittest,” Dr. Dashun Wang told The New York Times. “These people became better versions of themselves."

In other words, as the researchers said in their report, it turns out that it really is true that, “What doesn’t kill me makes me stronger."