Before the discovery of antibiotics, tuberculosis was the second most common cause of death in the US. Today, thanks to antibiotics, the few who contract the disease rarely die.

But as TB and other once-easily cured diseases grow increasingly antibiotic resistant, the very real fear is that medicine may run out of treatment options, leading to epidemics dwarfing COVID-19. 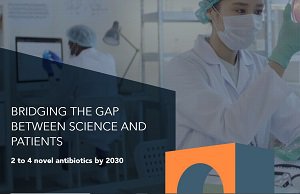 To head-off that kind of future, two dozen pharmaceutical firms have invested nearly $1 billion creating the AMR Action Fund with the goal of developing 2-4 new antibiotics by 2030.

AMR – antimicrobial resistance – arises when infectious disease pathogens become resistant to existing medicines. Tuberculosis is one of them, as are several others including the much publicized MRSA.

“Left unchecked, AMR could significantly eclipse the global health challenge that the world is facing currently with COVID-19,” he said in a statement announcing the launch of the AMR Action Fund.

The initial funding pledges from the bioscience and drug firms – including $100 million pledged each by Johnson & Johnson and Pfizer – will be supplemented by non-industry partners, the Fund says on its website.

Explaining that “drug resistant bacteria are developing faster than new antibiotics can reach the market,” the Fund says there are few antibiotics in clinical development to meet current and anticipated needs. The reason is that the market for antibiotics “doesn’t support the level of investment needed to maintain a robust antibiotic pipeline.”

The website goes on to explain that smaller biotech firms have trouble financing trials of the antibiotics they do develop. Some that have developed new antibiotics “have declared bankruptcy or exited this space,” cautions the Fund, “Due to the lack of commercial sustainability, resulting in the loss of valuable expertise and resources.”

To achieve its goal of bringing to market the new antibiotics in a decade, the Fund said it “will invest in smaller biotech companies focused on developing new antibiotics that address the highest priority public health needs.”

Specifically, the AMR Action Fund will:

Posted in Pharmaceutical | No Comments