Celebrating Healthcare Workers: 'You Are the Champions' 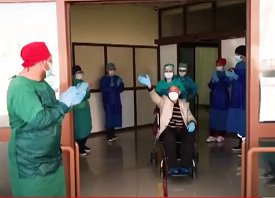 If you happen to be in a Rhode Island hospital, you might hear the Rocky theme song accompanied by cheering. At New York's Presbyterian Queens Hospital the song is Journey's "Don't Stop Believin." When the staff at Indiana University Health North Hospital celebrated the discharge of their first COVID-19 patient, the Beatles' "Here Comes the Sun” was playing.

All across America, hospitals are celebrating the discharge of recovered patients with upbeat, positive songs as medical staff cheer.

No one is certain where the practice began. The earliest word comes from CNN, which in mid-April reported that hospital staffs were celebrating the release of COVID-19 patients by lining the hallways to clap and cheer. Hospitals in New York were including music in these impromptu celebrations.

"It is not only a tribute to the resilience of the patient, but also an anthem of affirmation for the medical professionals: Through long shifts, with few positive moments and supplies stretched thin, they have saved another life," wrote The New York Times a few days later.

Now, singer Adam Lambert and Queen band members Brian May and Roger Taylor have produced a new version of a classic Queen hit, renaming it "You are the Champions" in honor of healthcare workers. Released on streaming and music download channels just over a week ago, proceeds from the song go to the World Health Organization’s COVID-19 Solidarity Response Fund.

The video version opens with scenes of empty streets and communities and images of mask-wearing people worldwide, before moving to medical professionals and first responders caring for victims. As befitting an anthem that celebrates victory, the video ends with hospital staff cheering the release of patients everywhere.