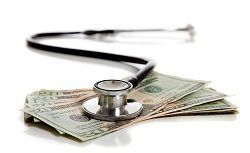 While the national discussion of a single-payer health plan falls along political lines, there is a small, but growing group that sees such as system as good for business -- employers struggling to keep up with the cost of providing health insurance.

“Businesses are really angry about the system, and there is a lot of frustration with its rising costs and dysfunction,” Dan Geiger tells Kaiser Health News. Although no Fortune 500 company is supporting the so-called Medicare for All proposals put forth by mostly Democratic lawmakers, Geiger, co-director of the Business Alliance for a Healthy California, claims “growing momentum among employers supporting single-payer."

Richard Master, CEO of MCS Industries, the nation's largest maker of picture frames, decorative mirrors and wall décor, is one of the leading business voices supporting a single-payer system. Last year, he formed the Business Initiative for Health Policy, a nonprofit group of business leaders, economists and health policy experts that explain the financial benefits of a single-payer system.

In the past, the push for that kind of insurance plan was about ideology. Now, says Master, “What I am saying is this is prudent for our economy and am trying to make the business and economic case.”

Master has a tough slog ahead. In March, the national Chamber of Commerce sent a clear and pointed to letter to every member of Congress stating it, "Strongly opposes legislation that would create or lead to a national, single-payer, government-run healthcare system, including “Medicare for All” proposals (H.R. 1384) and “Medicare Buy-In” proposals (H.R. 1346)."

"Medicare for All would eliminate privately funded health plans, including the employer-sponsored coverage enjoyed by over 181 million Americans. Medicare Buy-In would erode the employer-sponsored system by disrupting insurance pools and increasing the level of cost-shifting onto private healthcare that already occurs under the existing Medicare system," the Chamber said.