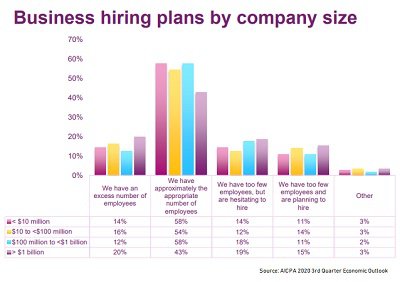 Rising from a virus-caused pessimism about the economy and their own business, finance leaders are beginning to feel more confident about the future.

The third quarter Economic Outlook Survey from the AICPA shows optimism rising strongly among CFOs, CEOs and controllers about most parts of their business, and especially about revenue and profits.

There’s also improvement from the second quarter survey about the US economy, though a deep worry still prevails.

Quarterly, the Association of International Certified Professional Accountants surveys its CPA business and industry members in nine areas including the overall economic outlook, their own organization’s outlook, employment, expansion plans and revenue and profits. The results are tabulated to create an overall CPA Outlook Index and individual category measures.

The overall Outlook Index improved to 54 from 38 in the second quarter. A reading above 50 is considered a positive or optimistic sentiment. The second quarter’s reading was the lowest since the 2009 depression year.

Though only 24% of the respondents were optimistic about the US economy, it is an improvement of 4 points over the previous survey. The AICPA says the optimists “cite the possibility of pent-up demand and lower energy costs, along with resilience and innovation.” The pessimists point to the continuing COVID-19 disruption.

When it comes to their own business, the survey respondents are much more optimistic. For example, 43% say they have plans to expand their business, a 19 point increase from the 2nd quarter survey. And in a case of doing less bad, revenue and profits over the next 12 months are still expected to be down, but by much less than previously believed. 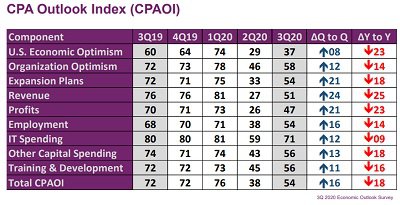 Headcount is about where it should be, say 55% of the respondents, a percentage that hasn’t changed much even since well before the pandemic. However, fewer companies now say they are overstaffed than was the case just a few months ago. And the percentage of companies planning to hire, still well below the 25% of a year ago, has nearly doubled since the last survey.

The Outlook drills down into industry sectors and geographic regions, most of which show growing optimism.