Break the 'Hi, How Are You' Conversation Deadend 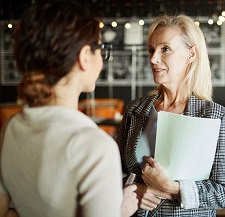 Is there anything more conversationally uncomfortable than a co-worker who welcomes you with a "Hi, how are you?" and actually wants an answer? A real one.

The New York Times tells us that with a little planning there's a way to turn the "How are you? Great, how are you?" loop into a real conversation and in the process learn to get comfortable with office small talk.

"Every day around the world, an estimated three billion people go to work and 2.9 billion of them avoid making small talk with their co-workers once they get there," the article begins, tongue in cheek.

Then writer Lindsay Mannering turns serious, explaining, "If you’ve convinced yourself that avoiding small talk with co-workers is smart self-preservation, that the risk of saying something 'dumb' or offensive or coming across as socially inept is not worth the reward of connecting with somebody (yes, even if that connection is a shared concern about it raining), then bad news: Your false logic could be costing you a promotion. Not to scare you or anything."

Quoting a career coach, Mannering reports that small talk builds rapport. And rapport, says coach Jamie Terran, "is the feeling that allows you to extend a deadline, or overlook smaller mistakes, because it makes it easy for you to remember we’re only human. Right or wrong, building rapport through interaction with colleagues could be the thing that gets you the promotion or keeps you in the role you’re in.”

Don't let anxiety over saying something dumb keep you from making small talk. We all do that, and the article mentions research proving pretty much we all think others are better at making conversation than we are.

So the next time somebody does one of those "Hi, how are yous" instead of responding in kind, break the cycle by saying something like "I'm great. Nobody burned the popcorn yet." Or, "There's fresh coffee in the breakroom" or something equally as innocent.

Planning your small talk ahead means you'll never have an uncomfortable moment when a co-worker runs into and asks, "How's it going?"