We interrupt all the bad news about COVID with this from the Institute for Health Metrics and Evaluation: surviving the virus has improved dramatically since the early days of the pandemic.

The likelihood of someone dying from COVID-19 has declined by a third.

In an interview with Reuters news agency, IHME Director Dr. Christopher Murray said 0.6% of those infected with the virus die, compared to 0.9% last spring. Improvements in treatment, including the use of blood thinners, oxygen and the generic steroid dexamethasone are a large part of the reason for the decline, he said.

Two research studies of patients in New York and in the UK bear out the positive news, finding sharp decreases in mortality.

Published last month in the Journal of Hospital Medicine, the New York City study found an 18% decline in COVID deaths since March among 5,121 hospitalizations.

A second study released just recently found a 20% decrease in mortality among hospitalized patients in England in June compared to the beginning of the pandemic in April. 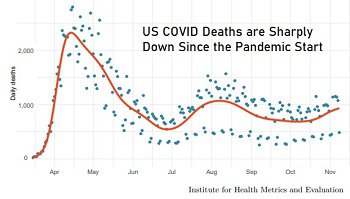 "I would classify this as a silver lining to what has been quite a hard time for many people," Bilal Mateen, a data science fellow at the Alan Turing Institute in the United Kingdom, told NPR.

Leora Horwitz, M.D., an author of the New York City study, echoed those findings. "We find that the death rate has gone down substantially," she told NPR. "I do think this is good news," she said, adding, "but it does not make the coronavirus a benign illness."

The Institute of Health Metrics and Evaluation, based at the University of Washington, cautions that with the advancing winter months, it expects the infection rate globally to increase to 4 million new cases a day. It estimates daily deaths will reach over 15,000 a day in mid-January declining to under 13,000 by March 1.

Specifically in the United States, another Institute report predicts “daily deaths to reach 2,200 in mid-January and slowly decline to 1,750 on March 1… we expect daily infections to reach 325,000 by early January.”

Estimating national mask use at 67% -- lower than many other organizations have found – the IHME report projects the US could save 68,000 lives by March 1 if 95% of the population wore masks.

A CDC report released at the end of October said that as of June, 88.7% of the US population wore masks. Even among the youngest group surveyed, those 18-29, 86.1% wore masks.