Learning to code can net you a better than 50% jump in pay, says a new report from Coding Dojo, the tech bootcamp for aspiring software developers.

Students with a bachelor's degree or higher who graduated from Coding Dojo saw an average salary increase of 58%. For those who only had a high school or GED, the increase was a stunning 117% in earning.

“Learning to code can be transformative, and one of the most concrete measurements of that is the economic mobility that our graduates realize,” said Coding Dojo COO and CFO Jay Patel.

The 10 year-old company accepts students from every walk of life at its 7 onsite locations. (It also offers an online curriculum.) Some of its students have computer science or related degrees, but many don't. Admission is open to anyone willing to put in 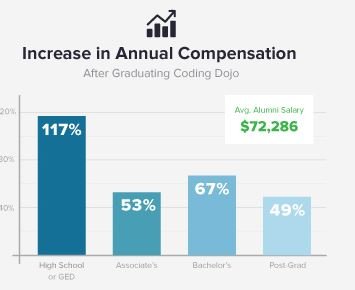 60% of Coding Dojo alums entered the bootcamp with a bachelor's degree under their belt. After graduating from the program, they saw an average salary increase of 67%. The 9% who came in with an associate's degree averaged a 53%, and the 10% of post-grad degree holders averaged a 49% increase.

Now, before you drop everything to go enroll, there are a few important details Coding Dojo didn't mention. Of its 3,000 alums, how many participated in the survey and how many in each degree holding category. The smaller the number of each type of degree holder, the more a few really stellar earners can skew the average. And it would be interesting to know what they were doing and how much they were earning before learning to code.

However, Coding Dojo did report that graduates who get jobs in the technology industry have an average starting salary of $72,286.50. Microsoft, Expedia, AT&T, Amazon and Apple are the top employers of the bootcamp's grads.