Alcohol Study: Is Even One Drink Too Many? Nah! 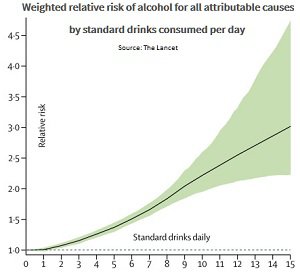 Just in time to spoil everyone's Labor Day barbecues came the news last week that there is no safe level of alcohol consumption.

"Our results show that the safest level of drinking is none," was the dire conclusion of a massive study published in the prestigious medical journal The Lancet. That single sentence made headlines around with the world. This one from Bloomberg.com is typical, if somewhat subdued: "No Amount of Alcohol Use Is Safe, Analysis of Studies Finds."

The study was an analysis of hundreds of other studies of alcohol use around the world. Among the findings -- and there were many -- was that among those 15 to 49 years old alcohol was a factor in the deaths of 3.8% of women and 12.2% of men.The leading causes of those deaths included tuberculosis, highway accidents and self-harm. In older people, it was alcohol-related cancer.

Now before you dump that glass of cabernet, you should know that the alarmist warning may be just that. Since the research was first published August 23rd, a trickle of articles has begun to appear questioning the "no amount of alcohol is safe" conclusion.

Dr. James Hamblin, an author and editor, writes in The Atlantic that, "The harm associated with a single daily serving of alcohol was tiny — almost zero." He doesn't negate the report's essential thesis that, as he puts it, "alcohol is indeed an extremely dangerous, toxic substance." Instead, Hamblin reassuringly tells us, "Not everyone need worry."

A Vox.com article takes a more aggressive approach to the report conclusion. Writer Julia Belluz spoke with several scientists and researchers who challenged the conclusion that one or two drinks increased a person's risk factor for health problems.

Cecile Janssens, a research professor of epidemiology at Emory University, told Belluz, “This paper shows that very heavy drinking is unhealthy, but it doesn’t show that zero drinks is the safest.”

The conclusion of the Vox report? "The difference in health risk between those who drink nothing and those who have one daily drink is tiny — and, given the weak observational research it’s based on, potentially not meaningful."