Accounting professionals are feeling better than they have in months about the U.S. economy, but their outlook is still far more cautious than when the pandemic began. 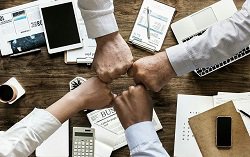 The fourth quarter Business & Industry Economic Outlook Survey showed 37% of the respondents expressed optimism about the economy, a 13 point increase from the Q3 survey.

Conducted every quarter by the Association of International Certified Professional Accountants, the survey found the 740 CFOs, CEOs and controllers were also more optimistic about the global economy. The global outlook improved from 17% in Q3 to 27% in the current quarter.

Though still wary about the continuing impact of the COVID pandemic, almost half (49%) were optimistic about the prospects for their own organization; 47% said they have plans to expand their business.

Looking ahead to next year, as a group the respondents saw revenue and profits improving. Where the 2Q and 3Q surveys showed the CPAs expecting declines in both areas of as much as 5.5%, now they expect revenue to improve by 1.2% and profit by a modest 0.2%. 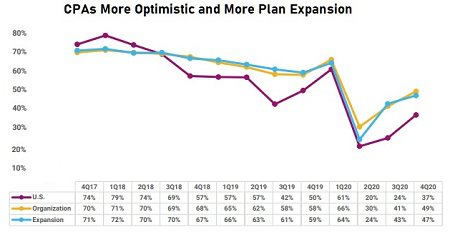 Headcount is expected to increase by 0.8%, also an improvement from the previous two quarters. 17% of the respondents said they have too few workers and plan to hire. In the Q1 survey, 26% said that. Another 17% said they also were understaffed, but were reluctant to hire right now. 51% said they were right-sized.

Overall, the CPA Outlook Index, a composite of nine survey components, rose for the second quarter, coming in at 62. That’s a 24 point improvement since Q2, yet still below the optimism of the first quarter of the year when the index was at a high 76.