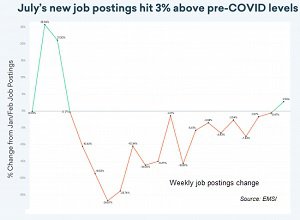 In July, staffing firms in the US added 143,700 new jobs. The growth was second only to the half-million workers brought on by restaurants and bars. The majority of those workers were laid off when businesses were ordered to close.

The Employment Trends Index is now at 50.89, a rise over June of almost 9%. In February, a month before the government all but essential business to close and people to stay home, the Index was at 109.22. In March, the Index fell to 42.39, a low not seen even during the height of the Great Recession.

A second Conference Board measure, its Help Wanted OnLine (HOWL) index has improved by almost 16% since hitting a six year low in April. The Index, which measures changes in advertised online job vacancies, is now at 90.2. In February, the month before the government ordered businesses to shutdown, the index was at 109.4.

This shows that more employers are looking to hire.

EMSI, a provider of labor market analytics, suggested the job market might be even stronger. It’s analysis of new job postings, released earlier this month, says the number of jobs advertised online in July was 3% higher than at the beginning of the year.

“New job postings are inching back to normalcy in a highly abnormal time,” EMSI said.

In another positive sign, new claims for unemployment last week fell below 1 million for the first time since March.

“Even though we’re exiting the worst of the current crisis, we’re still above the worst of the Great Recession,” Daniel Zhao, senior economist for the career site Glassdoor told The New York Times.

Though slow and erratic, the reopening of businesses points to an improving, if fragile, economic climate. Continued improvement, however, depends on multiple factors, especially the success at controlling the spread of COVID-19. There are more than

Offering a gloomier outlook, Gad Levanon, head of The Conference Board Labor Markets Institute, cautioned, “Despite increasing again, the ETI’s July results mark a small improvement compared to the gains made in May and June.”

He sees a slowdown in job growth in the coming months as the boost the indices received from business reopenings begins to taper off.